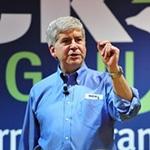 Interview with now Governor Rick Snyder as a candidate in the 2010 Michigan Governor’s race on Michigan’s future. 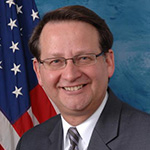 US Congressman Gary Peters interviews with Scott Weinberg about Michigan’s economy and how he wants to save the Great Lakes State. 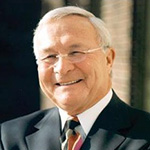 Tom George was elected to the 20th District of the Michigan Senate in 2002 after serving one term in the House of Representatives. The 20th Senate District includes all of Kalamazoo County and Antwerp and Paw Paw Townships in Van Buren County. As a member of the Senate Appropriations Committee Tom serves on four sub-committees. He is Chair of the History, Arts and Libraries (HAL) sub-committee and Vice-Chair of the Higher Education and the Department of Labor and Economic Growth Subcommittees, and he is a member of the Department of Community Health (DCH) subcommittee. Tom also serves as Chair of the Senate Health Policy Committee and is a member of the Joint Capitol Committee. A practicing physician in the Kalamazoo area since 1985, Tom served as the medical director for Hospice of Greater Kalamazoo from 1996 until 2001. 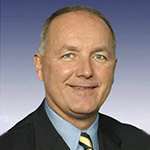 As one of the few former Fortune 500 business executives in Congress, Congressman Pete Hoekstra represents Michigan’s Second Congressional District in Washington. He was originally sworn in to the 103rd Congress in 1993. In 2004, Pete was named Chairman of the House Permanent Select Committee on Intelligence. Now serving as the top Republican, he works to lead Congressional oversight on issues relating to the U.S. Intelligence Community as the United States defends itself against all threats. Pete is also a senior member of the House Committee on Education and Labor. Pete is a graduate of Holland Christian Schools, holds a bachelor’s degree in political science from Hope College and an MBA from the University of Michigan. Prior to his election to Congress, he worked for 15 years at Zeeland, Mich.-based office furniture manufacturer Herman Miller Inc., where he held the title of Vice President of Marketing. He was born in Groningen, the Netherlands, and immigrated to Michigan with his family at the age of 3, making him one of the few members of Congress who was not born in the United States.