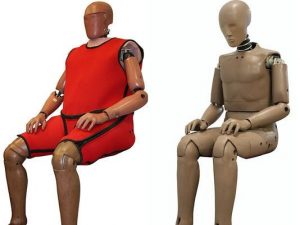 Americans are getting fatter — and so are the crash test dummies used to test the cars they drive.
Plymouth-based Humanetics has introduced a new obese dummy to reflect American’s growing size. The 273-pound dummy — officially called an anthropomorphic test device — is 106 pounds heavier than the traditional model, reflecting public health trends.

According to the Centers for Disease Control and Prevention, 34.9% of American adults — an estimated 78.6 million people — are obese and Humanetics President and CEO Chris O’Connor explained that how they fit in the seat, how their different centers of gravity could translate into car crash injuries, how seat belts and air bags work on them, and are different enough to warrant a new dummy body type.

“The average person has changed dramatically,” he said. “It was important to put out a piece of test equipment that auto companies and safety suppliers can use to decide what the best way is to restrain an obese person, since so many obese people are driving. … It’s not just weight. It’s the question of girth at the center area.”

A University of California-Berkeley study, published in 2013, found that obese drivers are up to 78% more likely to die in car crashes.

Around since the 1980s, the traditional crash test dummy is often seen in car commercials to vividly show a vehicle’s safety level, but perhaps are best known by the talking crash test dummies in the Ad Council ads, which say: “You can learn a lot from a dummy,” starring the dummies Vince and Larry.

Note that the new obese model is also 5 inches taller than the more commonly-used 5-foot-9 version. 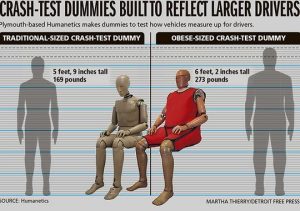 PhotoPlymouth-based Humanetics makes dummies to test how vehicles measure up for drivers.(Photo: Martha Thierry Detroit Free Press)
It costs the same amount as the normal-weight dummy — $500,000 — and according to O’Connor, can be reused for decades.

Humanetics, believed to be the only designer and manufacturer of crash test dummies in the U.S., was founded in 1952 to make what were then called mannequins to test airplane ejector seats, but added car crash test dummies in the 1960s, according to O’Connor. Today, it has 500 employees, supplies OEMs, Tier 1 safety suppliers, government agencies and medical researchers and has an estimated $125 million in annual sales.

Its dummy lineup also includes women and children of various ages. They’re made of metal bones wrapped in vinyl with rubber in certain joints and then loaded with sensors, O’Connor explained.

“Safety continues to evolve. A five-star rating from five years ago is probably a three-star today, because the bar goes up,” he said. “We need to have safety for all body types. We want everyone to be safe.”

“Having the ability to test cars and use crash test dummies that reflect a wide variety of body types is positive,” said the 29-year-old activist and Wayne State University graduate student, who lives in Detroit’s Cass Corridor. “Fat people tend not have enough space between them and the steering wheel. They’re more likely to have physical impact with the car in a car crash. In contrast, thin people don’t have fat on their body to be protected from seat belts. All people are not the same size.”

However, the Insurance Institute for Highway Safety has no plans to incorporate the obese dummy into its testing program.

“It’s not clear what would we learn that’s different by using a heavy crash test dummy. When the structure (of the vehicle) holds up, that helps protect people of all shapes and sizes,” IIHS spokesman Russ Rader said. “When there is structural collapse, the risk of injury is higher, but it’s not clear that’s different for small people as compared to heavy people. … Obese people are at higher risk in crashes, but it’s not clear using heavier crash test dummies would reduce those risks.”

The Detroit Three don’t seem poised to make any changes, either.

“We are studying the modification made to an average male anthropomorphic test size to increase its mass and will evaluate the effects of the modifications when it becomes available. In the meantime, we look forward to the test results,” said Chrysler spokesman Nick Cappa.

The obese model goes on sale early next year.

“GM is committed to the development and application of the best safety technologies and test devices to ensure the protection of all occupants. To stay on the leading edge of vehicle safety testing, we constantly evaluate new trends and devices that may help us design our cars and trucks to deliver the highest levels of safety for our customers,” spokesman Klaus-Peter Martin said. He declined to say if GM plans to buy this type of dummy.

Ford spokeswoman Kelli Felker wouldn’t comment on whether it will purchase the new obese model, saying only, “We have robust testing procedures.”

The National Highway Traffic Safety Administration is taking a wait-and-see approach: “NHTSA works to protect vehicle occupants of various sizes, ages and genders. We’re aware of the new dummy developed by Humanetics and look forward to learning more about it, but it’s too soon to speculate on if it would ever be added to our program or family of dummies.”

The UC-Berkeley study found that drivers with a a body mass index of 30 to 34.9 were 21% more likely to die in a crash versus those with a BMI of 35 to 39.9, who were 51% more likely and those with a BMI of 40 or above who were 81% more likely. Researchers also concluded that obese women had a greater chance of dying in car crashes than obese men. http://www.usatoday.com/story/money/cars/2014/11/28/as-drivers-get-fatter-so-do-crash-dummies/19643471/